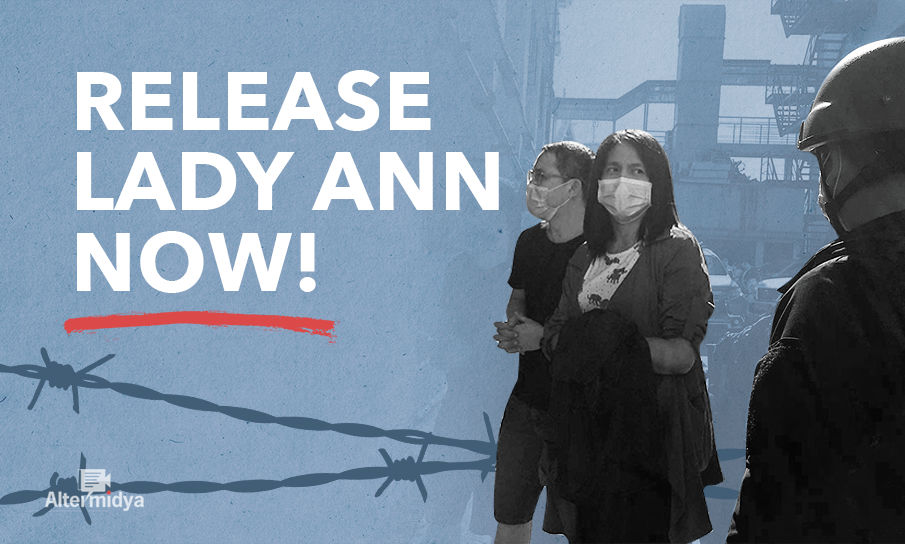 While we in the Altermidya Network hail the order of Mandaluyong Regional Trial Court (RTC) Branch 209 Judge Monique Quisumbing-Ignacio dismissing the charges of illegal possession of firearms & explosives against our colleague Lady Ann Salem and labor union organizer Rodrigo Esparago, we are one with her family and the media community in calling for her immediate release.

Judge Quisumbing-Ignacio’s decision is proof that the raid and subsequent arrest of Lady Ann was based on a fabrication, one that was used to carry out the orchestrated attack against her and the six other unionists arrested on Human Rights Day.

The Mandaluyong RTC’s order unmasks the routine modus operandi of state forces: that of conducting late-night raids and planting evidence to warrant arrest. This same scheme has been carried out against other human rights defenders in recent months.

We stress that Burgos-Villavert was the same judge who issued suspicious search warrants against another colleague, Anne Krueger of Paghimutad Negros, in 2019.

We hope that the Mandaluyong RTC decision signal other presiding judges to practice judicious prudence and similarly junk fabricated charges against those who have been detained for simply reporting or speaking up against abuses of the administration.

It has been two weeks since the cases against Lady Ann have already been dismissed, but she remains in detention until now. There is no longer any reason for our prison system to detain her. We call on the city prosecutors and concerned government officials, especially the Philippine National Police and Justice Department, to swiftly carry out the dismissal order and free Lady Ann.

We remain vigilant of any move to obstruct or delay Lady Ann’s release. We continue to fight for press freedom and guard free expression, especially amid continuing attacks against truth-tellers and human rights defenders.