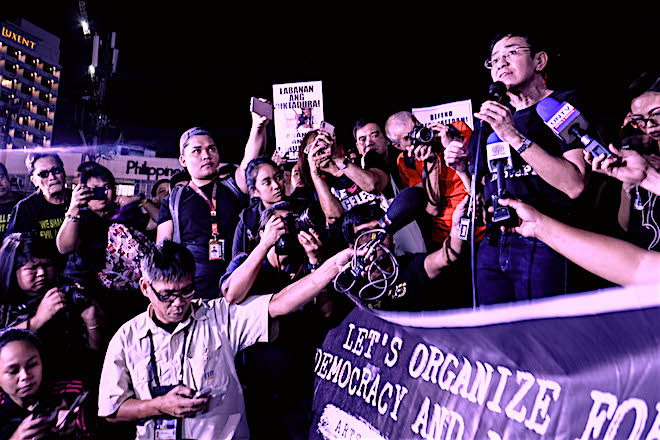 We in the alternative media community stand in solidarity with journalist Maria Ressa and news outfit Rappler as the Manila Regional Trial Court hands down on June 15 its decision on the cyberlibel case filed against them over a 2012 story involving businessman Wilfredo Keng.

Malacañang had previously denied it has a hand on the cyberlibel case, even as Ressa and Rappler face several other accusations of tax fraud, and violations of the Securities Regulation Code, the Anti-Dummy Law, etc. It has also denied it had anything to do with the shutdown of broadcast network ABS-CBN, even if all indication points otherwise.

Taken as a whole, this barrage of legal cases and accusations against Rappler, ABS-CBN, and other independent journalists is clearly part of the administration’s continuing attack against the media — with a determined aim of instilling fear among media practitioners committed to reporting the truth and holding the administration into account.

The Philippine media, both in the alternative and dominant, has faced a systematic assault under the Duterte administration. An unfavorable verdict on Rappler’s case would be another blow to press freedom and free expression in the country, but this will certainly not deter the media community in resisting repression.

We encourage our fellow media practitioners in both the alternative and dominant media to stand with Rappler as part of our duty of defending press freedom and opposing the Duterte regime’s suppression of our rights and civil liberties.