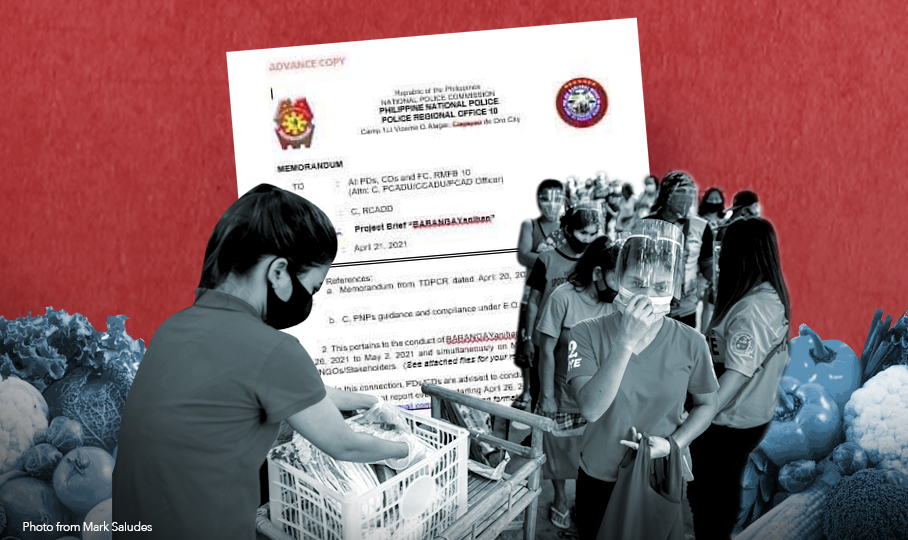 A memorandum and attached project brief from Philippine National Police (PNP) Cagayan de Oro are instructing cops to employ pre-designated beneficiaries in the rollout of their Barangayanihan initiative, which is inspired by the Maginhawa Community Pantry.

Under the said project, police precincts will serve ‘breakfast lugaw’ to select constituents in respective barangays. They are required to cite the Maginhawa Community Pantry as inspiration and make it clear that the effort is a partnership between the precinct and barangay donors and stakeholders.

“Respective beneficiaries will take pictures of the activity and post in their respective FB accounts. These netizens can be planted beneficiary civilians so as to manifest community’s appreciation,” read the project brief. 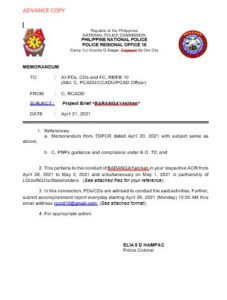 Although the project brief is attached to the said PNP Regional Office 10 memo, it mentions implementation by almost all precincts in Manila Police District and “possibly the whole NCR and other regions” in the rollout phase from April 21 to 25. Moreover, the next phase from April 26 to May 2 instructs nationwide Barangayanihan.

During this phase, the police are likewise instructed to “ask or plant civilian beneficiaries to take pics/selfies and posting in respective [Facebooks] with appreciation captions and standard MANDATORY hashtags.” 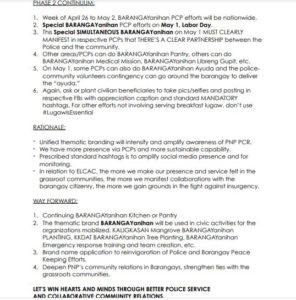 The objectives of Barangayanihan, according to its project brief, include forging stronger ties with the grassroots through the “basic unit of society”, the barangay.

The police directive also explicitly states that “The more we manifest collaborations with the barangay citizenry, the more we gain grounds in the fight against insurgency”, confirming the suspicion of several critics that state forces are planning to use the community pantry against the progressive movement. 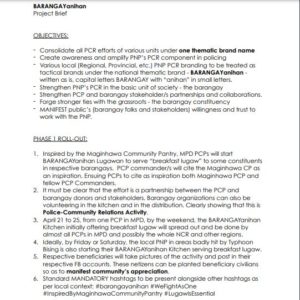 A portion of the project brief reads “Respective beneficiaries will take pictures and post in their respective FB..”

The said memorandum listed among its references the PNP’s guidance and compliance under Executive Order 70, which institutionalized the whole-of-nation approach against insurgency and established the National Task Force to End Local Communist Armed Conflict (NTF-ELCAC).

Capuyan’s message read that the task force is encouraging its clusters, including the Peace, Law Enforcement and Development Support (PLEDS), the Poverty Reduction Livelihood and Empowerment Cluster (PRLEC), etc. to start their own community pantry activities. 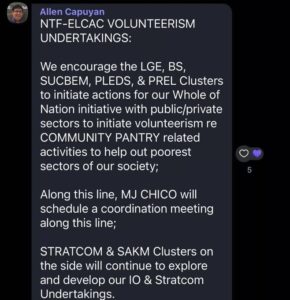 “Clearly, after failing to discredit and intimidate the community pantry movement, the NTF-ELCAC, police and military establishment are poised to hijack it due to their paranoia that it’s all a communist plot,” he said. “They simply can’t leave a good thing alone.”

In a statement, labor group Kilusang Mayo Uno (KMU) said that the huge budget of the PNP should instead be rechannelled to cash aid for the poor. The Barangayanihan, it said, is a “publicity stunt” that hijacks pantries and attempts to conceal the government’s failure in addressing the pandemic.

With reports from Ratziel San Juan