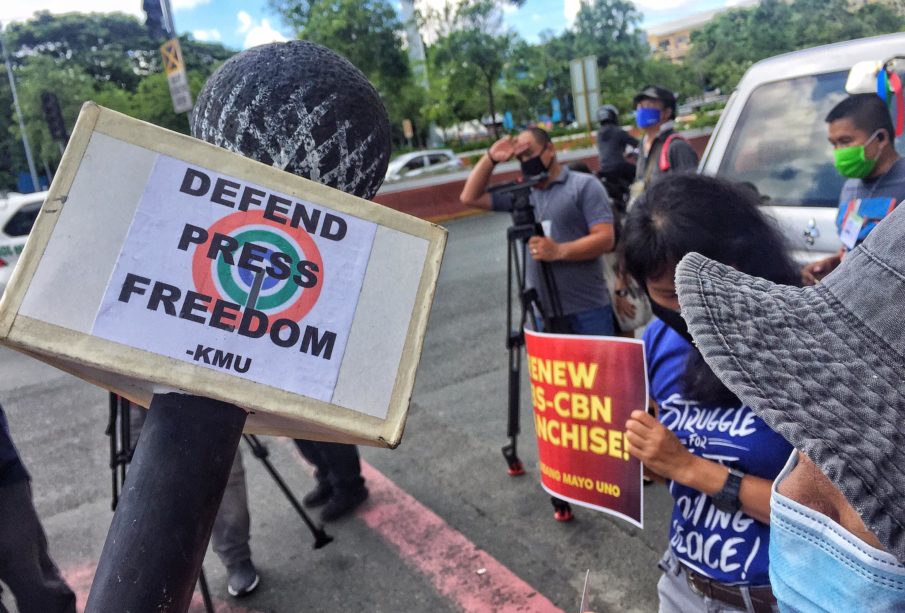 COMMUNICATION academics, media advocacy groups, human rights defenders, journalists’ organizations, artists and other professionals, and even some congressmen and senators have condemned the shutdown of ABS-CBN.

But national artist for literature F. Sionil Jose is among the very few writers who’re supporting the silencing of the network. The Philippine Center of PEN (Poets, Playwrights, Essayists, Novelists) International, which he organized in 1958, is itself critical of the government order, and has correctly described it as an assault on free expression and press freedom, and therefore on democracy—or what little is left of it.

Sionil Jose weighed in on the issue in a Facebook post and a patronizing column in a Manila broadsheet. He argued that “Filipinos do not really need ABS-CBN” and that its being forced off the air doesn’t undermine press freedom. Since “it does not produce goods or food,” no one should mourn the network shutdown because “it did not diminish poverty.”

Describing the network owners, the Lopezes, as oligarchs, Sionil Jose claimed that by diminishing their power, the shutdown of ABS-CBN brings the country closer to the realization of the “revolution” that he believes is the only solution to the poverty of the majority, particularly the peasantry. The “demise” of ABS-CBN, he concluded, will be “good for democracy” because it will help end the rule of the oligarchy.

An oligarchy is quite simply the rule of the few. It might well be asked if the Lopezes are among the handful of families that lord it over this country. If they are, they should have had no problem in getting Congress to renew the franchise of ABS-CBN. But the most recent developments suggest that the end of the network may indeed be imminent.

The House of Representatives has reneged on its earlier promise to give the network a provisional, five-month permit, while the the National Telecommunication Commission, at the time this piece was being written, has asked the Supreme Court not to issue a temporary restraining order against its May 5 “cease and desist” order shutting down its operations. ABS-CBN executives have already alerted the company’s 11,000 employees of the distinct possibility that they will lose their jobs by August this year.

Wealth the Lopezes may indeed have, but wealth alone does not make any family part of the oligarchy. One also needs political influence at least, if not actual power.

It’s supposed to be a democracy, but the Philippines is ruled by an oligarchy—or more precisely, by bureaucrat capitalists who use their political power to enrich themselves. But whether the Lopez family qualifies as part of those few or not seems hardly at issue at this point. Throwing the oligarchs out for the sake of democratizing Philippine governance does matter, but will throwing out one oligarch make the difference? With or without the Lopezes, the oligarchy will still be in power, and Sionil Jose’s “revolution” unlikely.

What’s even more to the point is that through an orchestrated campaign that has included President Rodrigo Duterte’s repeated threat to make sure its franchise is not renewed so it will be “out,” and the mobilization of at least two agencies of the government as well as members of Congress, it is that very oligarchy that has been focused on silencing the network.

Sionil Jose’s declaration that the country won’t lose anything with the ABS-CBN shutdown provokes another question. Is the value of an entity decided solely by whether or not it produces material goods and food? Like writers such as Sionil Jose himself, the best journalists and media workers produce neither, but their work does have value.

By reporting and explaining what’s happening in their country and the rest of the world, they help their fellow men and women understand their social and natural environments not only so they can better function in them, but also to enable them to make the informed decisions that can make the difference between being slaves of circumstances or prevailing over them.

The Constitution so understands the value of the media to democratic governance, and that of press freedom and free expression, that it explicitly protects both in Article III Section 4 of its Bill of Rights. Both freedoms are the necessary complements to the people’s Constitutional right to know, which includes the prerogative to choose which medium or source of information they prefer to access, but which the shutdown now severely limits.

Sionil Jose said Filipinos “don’t really need” ABS-CBN. But the value of the reports the network used to provide over radio and free TV was plainly demonstrated during last May 14-17’s typhoon Ambo, when some of the people in the hardest-hit areas, because of the shutdown of their usual sources of information, turned out to have been unaware that a typhoon was going to smash into their communities and were therefore unprepared for it.

It is nevertheless true, as Sionil Jose points out, that, barring government intervention and other catastrophes, there are other media organizations that will continue their operations. But like ABS-CBN, those networks and newspapers are also owned and controlled by political and economic interests. The difference is that the latter are demonstrably better connected politically than the former. One had no problem renewing its 25-year franchises, and has not been the target of government intimidation and harassment.

The media are powerful institutions that can shape collective opinion, decide the agenda of public discourse, move people to action, and in general influence the ideas, attitudes and values of the multitude. Their power over the public mind makes vital the question of whether individual journalists and other practitioners are able to report truthfully and fairly those events and issues that affect the lives of billions all over the world.

The political and economic interests of media owners are too often a major factor in the way media provide news and entertainment. But if this is the general rule, it isn’t by itself enough to justify condemnation of the entire corporate media community. What is needed is to establish what is happening on the ground, which requires content analysis of the reporting, commentary, and analysis that Philippine media provide, as well as research into the extent of owner control over media content.

Media critics and analysts have so far found that ABS-CBN reporting has been relatively fair to government and other entities. Meanwhile, intervention in the operations of other media companies in behalf of the political and economic interests of their owners has been uneven. In print, some have been known to dictate what will appear on the front and opinion pages, while others leave it to professional staff to make such decisions unless a report, analysis or opinion piece is of particular relevance to advancing or compromising those interests.

These realities help explain the seeming vagaries of Philippine media performance. But what is critical at this time to understanding what’s at stake in the shutdown of ABS-CBN is the context in which it is happening. Other news organizations and individual journalists have been harassed and threatened, barred from coverage, and criminal libel and other cases even filed against them because their reportage, analysis and commentary, like those of ABS-CBN, were not to the liking of the oligarchs who rule the country.

It should be more than evident that these acts are forms of censorship. They are hardly “good for democracy.” On the contrary: despite the wealth and economic interests of its present owners, ABS-CBN’s continuing its operations is what would be.

Prof. Luis V. Teodoro is the national chairperson of the Altermidya Network. This post first appeared in Vantage Point published by BusinessWorld.

We will fight back a reign of terror

ABS-CBN shutdown: An assault on the people’s right to know