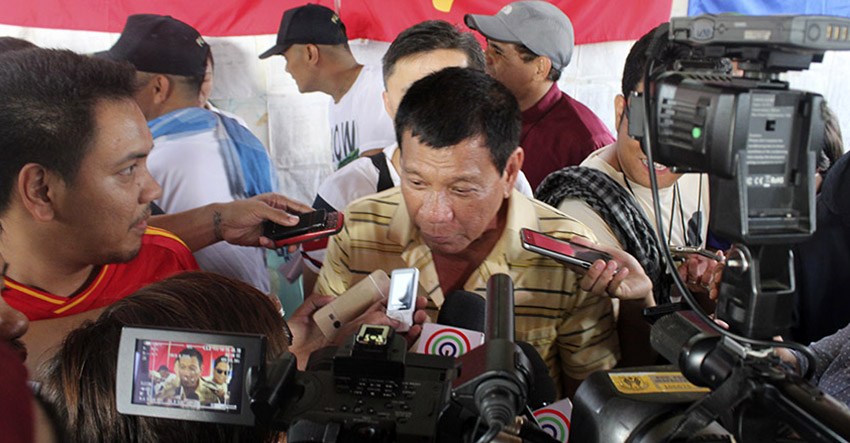 The media challenge under Duterte

It was quite a shocker to have president-elect Rodrigo Duterte hit the media as hard as he did last week. The words “kill journalism” and “don’t f*ck with me”—no matter the context—were enough to send shivers down my spine.

But after the initial shock, one realizes that a person of authority attacking the media is nothing new. All Philippine presidents have treated the press as the enemy and toed a line similar Duterte’s. The difference, of course, is that all past presidents have been “refined” in their manner of intimidating the press; by now we know that we cannot expect such refinement from the president-elect.

There is another difference, though, that seems to be worth pointing out. Duterte pinpoints the media industry as part of what he deems as “hypocritical” institutions, right alongside the Catholic Church. This has never been the line of any past president. Curiouser still is the fact that many of his supporters—the more than 16 million Filipinos who voted him to power—seem to agree. Thus the assertion bears a closer look.

But I also, however, do understand Duterte supporters who feel that dominant corporate media has been biased against their candidate since the electoral campaign period. I understand the people’s anger at what they feel that the media has done with its agenda-setting powers for the past six years: for them, it was basically collaborate with the past administration as it demolished political opponents and tried to cover-up or sugarcoat its own failings.

It is distressing to see that the first to suffer from this kind of anger are overworked and underpaid journalists who in the industry are just doing their jobs, more so those who are doing it fairly and well. Do not shoot nor harass the messengers is still the basic message we must all strive to get across.

But the reality is, perhaps this message doesn’t resonate as strongly as it should, despite the efforts of vibrant press groups here and abroad. I’ve always believed that in order for campaigns on press freedom to succeed, it must have the support of the people. That the banners of press freedom and free expression should be held high not just by journalists, but by all citizens.

The undeniable fact is, people’s distrust of the dominant media is high. I see Duterte supporters articulating or sharing memes on how media is an instrument of controlling the minds of the masses, and they are, in truth, correct. Just like how Duterte was, in truth, correct in saying that many journalists are on the payroll—although none of them should have been called a “lowlife” who deserves to die.

People who are thirsty, nay, desperate for change will distrust anyone or anything that represents the status quo. And corporate mass media is an institution that has always served to preserve the status quo. It operates with an institutional bias that stems from its essentially capitalist ownership. This institutional bias is by no means controlled by individual working journalists. This is something that people who attack journalists simply on the basis of the media outfit they are working for must understand. Most journalists are just messengers, not necessarily “mouthpieces.”

But on the other hand, journalists must reflect on why they are seen as part of the machinery of the elite. Why sensationalism, the race to the bottom line, and the beat system wherein most reporters are required to do nothing more than hang on to the words of government officials and businessmen has hurt its image badly as the Fourth Estate. Of course professionalism matters. But it is simply not enough.

We have seen this with the rise of citizen’s media through new media, which some say parallel or even trump the power of the dominant media. I do not believe so; but certainly it has acted as a check-and-balance, an alternative force for agenda-setting, which for so long had been the monopoly of dominant media.

Citizen’s media will never have the same resources for data-gathering or the editorial processes of corporate media. But that difference should not be seen by professional journalists as an inroad to assert their own superiority, which have so far turned the masses away from them. Rather, what the citizens lack in information and analysis, they should provide with a commitment to the kind of journalism that truly serves the people.

For the moment, there is nothing much to be done about corporate media monopolies except to push Duterte to uplift journalists from oppressive working conditions that make them vulnerable to corruption. Ending rampant contractualization in the media industry will professionalize it; antagonizing journalists will contribute nothing to that effect.

There will always be agenda-setting that is determined at the highest echelons of corporate media power. The challenge is to not to let it hold total sway over journalism, through reporting that is accurate, critical, fair, and enterprising. For the media cannot effectively do its role as long as the people perceive it to be a tool of political forces that are responsible for their oppression and misery.

The even greater challenge is for the people to set the agenda it wants and deserves—if not through the dominant media that it does not control, then through its own. The challenge is not to blame the messengers, but to become relentlessly active in shaping the message too.

AlterMidya Statement: Journalists are Not the Enemy