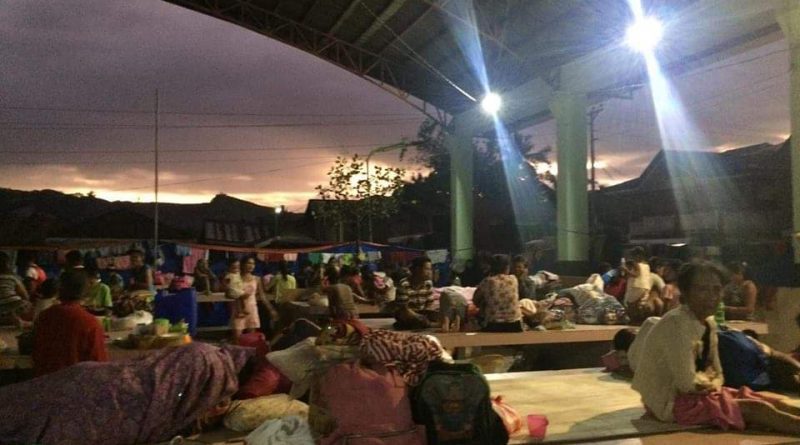 The three-month military operations of the 87th Infantry Battalion Philippine Army (IBPA) in the villages of Hagbay, Can-aponte, San Nicolas and San Pedro triggered thousands of civilians to leave their homes and take refuge at the town’s covered court.

As of March 25, human rights group Katungod Sinirangan Bisayas reports that there are already 454 women, 454 men, 424 children, 66 senior citizens and 11 pregnant women who are staying at the designated evacuation center. The number of evacuees is still increasing from 42 families on March 17 to almost 300 families at present.

The local government unit of San Jose de Buan and even Police Chief Inspector Constantino Jabonete Jr., through a radio interview on March 19, confirmed that the 87th IBPA have been camping inside the community premises. This is contrary to the initial statement of the said military unit who first denied the still on-going military encampment.

Katungod Sinirangan Bisayas, in a statement, said that the government soldiers have been utilizing at least 6 houses of the civilians as their military barracks. One of which is owned by Elsa Gabiana of Brgy. Hagbay who still recalls how afraid she was in staying in her own house with the military officers.

The AFP have also been conducting surveys within the said villages and takes picture of the recipients even without their consent according to the human rights group.

Despite the firm demand of the civilian populace to immediately pull-out the military troops in their communities, the 87th IBPA directly disregarded their call and instead prolong the difficult situation of the residents in the evacuation center.

“Using the threat of armed rebel groups as an excuse, Katungod believes that the militarization of Hagbay is, like many other cases in the region, a desperate attempt by state forces to use innocent civilians as human shields against possible offensives waged against them by the New People’s Army,” said Katungod Sinirangan Bisayas in a statement.

Residents of the said villages in San Jose de Buan, Samar call for the general public to support them in their demand to halt all state-sponsored human rights abuses to finally bring peace back in their communities.