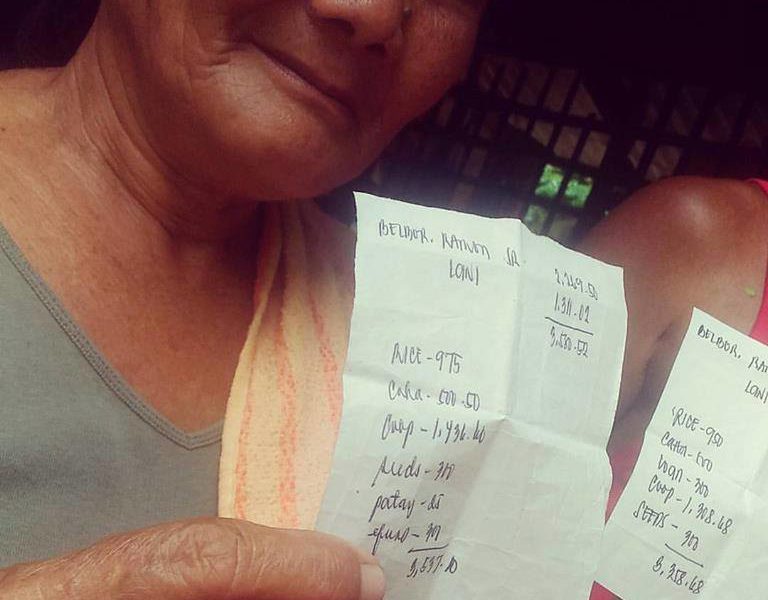 ‘Tiggulutom’ in Negros: Sugar workers earn ‘next to nothing,’ tear up pay slips

BACOLOD CITY – Nanay Lani holds up her pay slip, a small piece of paper more akin to a list of dues that the proprietor of your neighborhood sari-sari store hands you to emphasize that you cannot get any more “credit” (utang or debt). The pay slip is handed to Nanay Lani by the hacienda’s enkargado (supervisor) every 15 days.

Usually, it is to prove that she earns next to nothing, or will only take home less than a hundred pesos for her two weeks’ toil in the sugarcane fields.

“Here,” Nanay Lani shows the piece of paper, “I took home only Php 43.42 for 15 days work.” She takes home a measly amount because her debts from the hacienda’s “cooperative store” for rice and other supplies have already been deducted.

“Now it’s tiempo muerto (dead season) and work is scarce. Even if we get some work, we no longer take home any cash. We even incur so much debt during this tiggulutom (season of hunger),” she says.

Her face melts into an anguished expression. This annual crisis period, tiempo muerto, is also called by locals as tigkiriwi – an odd period when the sugar industry’s work force collectively grumbles in hunger and pain.

In the capital of the country’s reputed “sugar bowl,” the province of Negros Occidental, farmworkers are now on the third day of tiempo muerto-related protests led by the Kilusang Magbubukid ng Pilipinas (KMP)-Negros and the National Federation of Sugar Workers (NFSW), the local affiliate of the national agriworkers center Unyon ng mga Manggagawa sa Agrikultura (UMA).

Last Wednesday, hundreds of farmworkers like Nanay Lani tore up their pay slips in a picket in front of the Department of Labor and Employment (DOLE) regional office here in the city. Protests were also held in Escalante City, 63 kilometers north of Bacolod.

NFSW Chairperson Rolando Rillo says that farmworkers are not totally helpless during this crisis period.

“Negros has a long history of struggle against exploitation and oppression by the island’s elite who also hold powerful positions or influence in national politics,” said Rillo.

The continued reign of the so-called “old rich,” the Marcos cronies like Danding Cojuangco and the Benedictos, and “present-day despots” like the Marañons, prove that Negros remains a playground of landlords. Peasant unrest is constant.

UMA Secretary General Danilo Ramos, who joined the local protests, said that aside from immediate aid, government must support farmworkers asserting their land rights. In many areas, organized farmworkers have already embarked on land cultivation initiatives. But these bungkalan areas most often meet violent opposition from the landlords.

“The failure of the government’s land reform program CARP (Comprehensive Agrarian Reform Program) is most visible here in Negros. Farmworkers will not have to beg for aid during tiempo muerto if their initiatives for food security are given full support,” said Ramos.

One current controversial case is that of Hacienda Ilimnan in Sta. Rosa, Murcia town, a dispute-ridden landholding whose case the Department of Agrarian Reform (DAR) recently resolved in favor of farmworkers.

Contesting this decision is no less than Gov. Alfredo Marañon Jr., who deployed armed military and police to evict and harass farmworkers tilling a 12-hectare area last month. The farmworkers still stay in a makeshift camp-out in front of the Negros Occidental Provincial Capitol here in Bacolod City to protest land grabbing and militarization.

Life is indeed bitter for our toiling sugar workers but their organized ranks are determined to wage various struggles to end hunger and the tiempo muerto.

In Congress, UMA supports the passage of the House Bill 555, or the Genuine Agrarian Reform Bill proposed by Anakpawis Partylist. Ramos also called on the Duterte administration to heed the farmworkers’ demand for genuine land reform and national industrialization.

“Tiempo Muerto will continue to be a season of hunger and death for sugar workers every year, if the country’s fundamental land problem is not seriously addressed,” ended Ramos.

Into the Information Breach