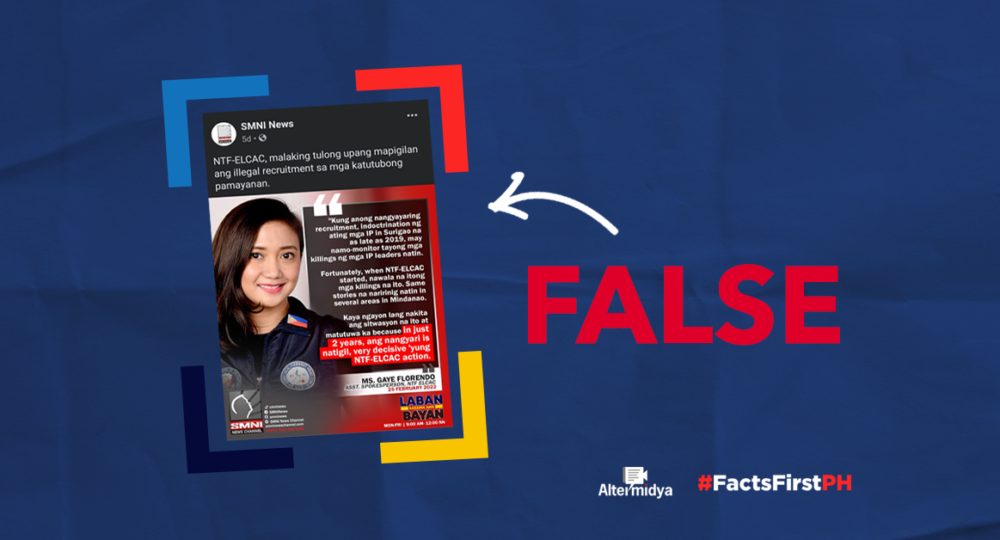 On February 25, Sonshine Media Network International (SMNI) posted a photo statement where National Task Force to End Local Communist Armed Conflict (NTF-ELCAC) Assistant Spokesperson Gaye Florendo was shown saying that the spate of killings targeting national minorities in Surigao and other parts of Mindanao has stopped when NTF-ELCAC was established.

Killing of indigenous peoples stopped when NTF-ELCAC was established

The NTF-ELCAC was formally institutionalized through Executive Order No. 70, which President Rodrigo Duterte signed in December 2018. Unlike Florendo’s claim that the killings – particularly involving indigenous peoples – exacerbated when the NTF-ELCAC was established, an agency that has brazenly tagged this spate of killings as ‘victories.’

The NTF-ELCAC has frequently been in hot water for its sustained red-tagging campaign against human rights defenders and known critics of the government. Instead of instilling peace, these red-tagging sprees have been linked to the harassment and killing of dozens of people, including indigenous peoples. In the Senate deliberations for the 2022 national budget, legislators expressed alarm over how the NTF-ELCAC has become a vehicle to aid and abet in human rights violations.

Just recently, even the European Parliament has fought for the abolition of the NTF-ELCAC which it tagged as the agency “in charge of red-tagging.” The European Parliament also called on the Philippine government to fully implement the Indigenous Peoples’ Rights Act and comply with its obligations under international law. – Vanessa Adolfo and Jamaica Marciano

Colmenares: Arrest of Makabayan coordinator in Cagayan an attack vs opposition