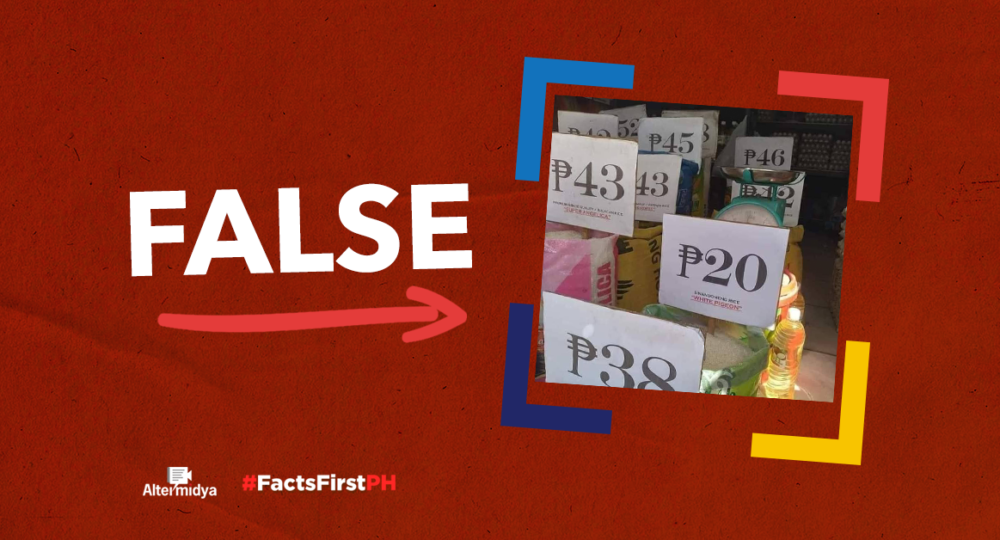 On May 14, a local radio outfit ‘Radyo Bandera Philippines’ posted on its Facebook page photos sourced from a certain ‘Jhybeth Paano’ that shows the Lam rice variant or the so-called ‘Sinandomeng’ rice that is usually sold at P42.00 per kilo now allegedly sold at P20 per kilo at a street store in Quezon City.

Same photos were posted on other social media platforms, claiming that following the apparent electoral victory of now President-elect Ferdinand Marcos Jr., rice retailers have voluntarily dropped their rice prices in adherence to Marcos Jr.’s campaign promise of lowering the price of rice to P20 per kilo.

Data from the Department of Agriculture debunks the claim that rice is now sold at P20 per kilo. According to DA’s Bantay Presyo of Prevailing Retail Prices of Agri-Fishery Commodities at NCR Markets as of May 27, the price of rice still ranges from P37.50 to P44.00. Markets covered in the said market watch include Commonwealth and Mega Q-Mart in Quezon City, and markets in the cities of Marikina, Las Pinas, Manila, Pasay, Pasig and Makati.

The P20 rice per kilo claim is connected to an earlier Facebook post of Marcos Jr.’s party, Partido Federal ng Pilipinas (PFP), which posted on April 17 a statement of Marcos Jr. where he promised to lower the price of rice.

In an interview by OneNews PH, Pamantasan ng Lungsod ng Maynila President and economist Prof. Emmanuel Leyco said that Marcos Jr.’s plan is not realistic as it will compromise the country’s farmers on all fronts. He also added that Marcos Jr.’s statement can be appealing and relatable to a vast section of the public but lacks realistic and pro-farmer implementation details.

President-elect Marcos Jr., won a landslide victory from a campaign that was widely anchored on disinformation and distorted narratives that basically altered the political record of the Marcoses primarily through online platforms. The Facebook post in question has so far reached 5,900 reactions and 2,700 shares — Mary Lou Destao and Michaella Ruiz