Home›Opinion›Columns›Martial Law and the Media 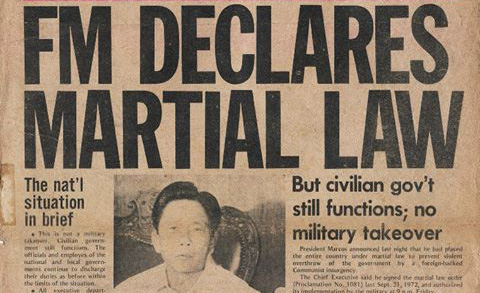 Martial Law and the Media

SOME radio and TV stations as well as broadsheets have been commemorating the declaration of martial rule in 1972 by airing and presenting special reports every September. These media organizations, among them the Philippine Daily Inquirer, started early this year. PDI provided, among others, information on how martial law claimed the life of its first victim, Liliosa Hilao shortly after its declaration.

In broadcasting, a TV interview with Ferdinand Marcos Jr., during which he refused to apologize for his father’s imposition of one-man rule, provoked the usual controversy over whether Marcos’ reign was after all good for the country — which is disheartening enough by itself, given the overwhelming evidence that has come to light over the years of how the dictatorship damaged the country then and continues to do so till today.

Explicitly or by implication, most of these reports carried the same message: the imperative for Filipinos to never again allow the imposition of authoritarian rule. But some articles laudatory of the martial law period have also made it to the pages of the broadsheets in past commemorations, together with interviews with college students who, by claiming that the Ferdinand Marcos regime did the country some good, displayed their appalling ignorance of the period.

The same ignorance has been evident for years not only among the young but even among older Filipinos, judging from the evidence not only in their issuances in the old media but even in the new. In such social media sites as Facebook and Twitter, the same moral agnosticism and intellectual vacuity approach epidemic proportions every September, when the declaration of martial law becomes the subject of posts by, among other groups and individuals, former political prisoners.

Forgotten or never quite learned, much less understood, is how the martial law period not only savaged the Bill of Rights, the economy, and those institutions of liberal democracy such as the press and representative democracy that, though flawed and limited, nevertheless allowed some measure of dissent and free expression, but also established a pattern of abuse and repression from which the country still has to recover, and decimated the ranks of an entire generation of the country’s best and brightest sons and daughters.

The failure of the administrations that followed that of Marcos to put in place a means of presenting with some guarantee of accuracy what actually happened during the period through an authentic truth commission in the manner of such other countries that emerged from dictatorship and repression as Chile, Argentina and South Africa, has been blamed for the inability of many Filipinos to comprehend the dictatorship’s human cost and the extent to which it set back the country’s democratization and social, cultural and political development.

The blame can most directly be laid at the doors of those who, while experiencing the terrors of martial rule, failed to convey its dimensions and meaning to their own sons and daughters. But as the institution charged with providing the information the citizenry needs to understand that and other periods critical to the state of the country, the media necessarily have a share of the blame as well. Missing among the specials, feature stories and other accounts commemorating the imposition of martial law in the years past are analytical pieces on the causes and forces behind the declaration and the fourteen years of repression that followed.

The default implies acceptance of the conventional explanation for the country’s descent into dictatorship — that it was merely the consequence of the ambition and corruption of one man, his wife, and his cronies. It’s a view that suggests that without a Ferdinand Marcos the dictatorship would not have happened.

Ignored are the authoritarian roots of the political system itself, whose trappings of democracy concealed the fundamental reality that the handful of families that have been using their monopoly over political power to defend and enhance their economic interests for decades have a critical stake in keeping the system intact.

Maintaining the façade of democratic rule served their purposes so long as it was not challenged. But in the late 1960s, the social unrest consequent to the inequality that for so long has characterized Philippine society reached one of its critical points, developing into a national and multi-sectoral campaign for change and the democratization of political power that made it difficult for these families to continue ruling in the old way.

The result was a political crisis to which the “solution” to the “threat” of democratization — at the time being tested and tried in several other countries in the same predicament and with the support and encouragement of the US, which, from Chile to Indonesia, was fomenting coups d’etats against elected governments all over the planet– was open authoritarian rule, with Marcos, whose personal ambitions and class interests coincided with those of the ruling families and their foreign patrons, acting in his own and their behalf. The declaration of martial rule was Marcos’ coup against himself as a democratically elected President.

Locating martial rule in the context of the country’s damaged and damaging political culture is indispensable to understanding why authoritarian rule happened — and what is even more crucial, why it can still happen. The media can and should continue to convey to their readers, viewers and listeners the necessity of never again allowing authoritarian rule. But of even more importance is the need for everyone to monitor the political system that has remained essentially the same despite the 42 years that have passed since Proclamation 1081, and in the process educate the present and future generations in the need to democratize it. Among the social institutions vital to mass realization of that imperative are the media.

A longer version of this article has appeared in the website of the International Free Expression Exchange.